My middle child has taken to the wonderful world of hunting.  He is also a soccer and basketball player, and those activities share the season with hunting.  So, along with the many other family adventures and obligations, our schedule does not allow for much quality hunting time.

A few weekends ago, I took him on a late season deer hunt.  My game cameras showed that the deer were mostly moving in darkness.  A cold-snap was upon us and a few deer ventured out during daylight hours to eat, so we decided to give it a shot.  Given the deer movements (or lack thereof) and the wind direction, I knew the chances were not great.

We left home at 4:30 am for our hour long drive to the property.  During our drive, he asked me “Do you think I’m an outdoorsman or an indoorsman?”  I responded “If you are willing to get up at 4:00 and sit outside in 20 degree weather, you are definitely an outdoorsman.”  He seemed happy with that answer.  He was excited about the hunt.  I was worried that he would not get a deer.

When we arrived at the property, it was still dark.  As I unloaded the truck, I looked at the lone oak in the clubhouse yard.  The moon lit up its bare branches.  The cold morning gave the moon a halo effect.  I looked over to my son, and he was staring at the sky in awe.  He was living in the Now.

On our way to our hunting spot, we heard several deer running off into the darkness.  I shined my flashlight on a small bush and he his eyes lit up when he spotted an antler shed.

Once we settled, I told him to be still and quiet.  As the sun came up, the woods awoke and we listened.  The cardinals chirped and rested on the cedars around us.  We heard turkeys gobbling behind us.  We were both living in the Now. 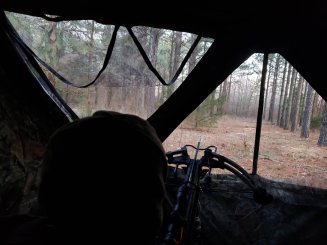 Finally, a deer approached.  She was moving towards us, but she was downwind.  Before she was in range, our scent hit her nose and she was off.  So it goes.

We called it after a few hours.  On our way out, he found two more sheds.  By living in the Now, he was aware of his surroundings.  He was able to distinguish the the sheds from the debris of the forest floor.

That morning, he reminded me to stay Present.  Don’t worry about whether or not we would harvest a deer.  Focus on the Now.  Enjoy the beauty of Creation.  Find the small treasures that are right in front of you.  Live in the Now.

Father of three wonderful boys and husband to one beautiful wife. View all posts by Wanderer